This year we decided to do the ultimate fall colour run. We didn’t get many rides in this summer so it seems like the perfect way to end the riding season. We loaded the motorcycles into the trailer and the kayaks onto the Jeep and headed to North Carolina.

We had been riding in North Carolina before and decided to stay at Fontana Village again as it’s centrally located for the rides and kayaking we planned to do.

On our way to North Carolina we stopped in Virginia and rode part of the Skyline Drive, known as one of America’s favorite mountain drives. We entered the North entrance of Shenandoah National Park and one of us rode while the other drove behind in the Jeep and switched after about an hour. 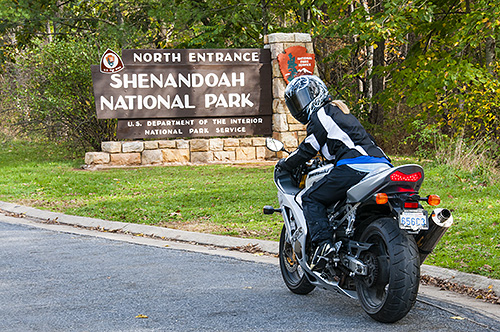 The 105 mile mountain top highway runs north-south along the top of Virginia’s Blue Ridge Mountains. There are a number of scenic overlooks that offer stunning views of the Shenandoah Valley. 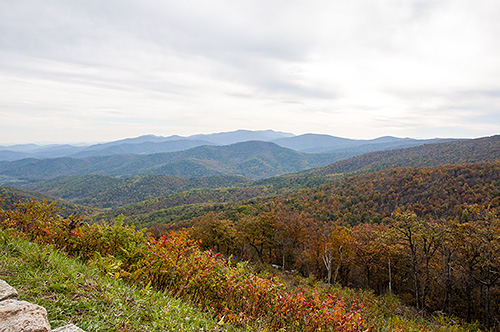 The speed limit is only 35 mph but with the sharp winds and curves to manoeuvre, while keeping an eye out for wildlife, we could see why it’s one of the loveliest roads in America.

After a quick overnight stop in Lynchburg, we still had another 6 hour drive before arriving at Fontana Village.

At least we had beautiful views along the way.

We had two routes planned that we wanted to ride along with a day of kayaking and a day of hiking so it wasn’t going to be a restful vacation!

The morning was cool when we woke up and unloaded the bikes and prepared for our first day of riding. We had decided to do the Cherohala Skyway first because we ran out of time when we were here last time and wanted to be sure we didn’t miss it again.

The 120 mile loop included the infamous Tail of the Dragon, and part of the Mooshiner 28 run. The Tail of the Dragon and the Cherohala Skyway are said to be two of the best touring roads in America. In our opinion the Tail of the Dragon, HWY 129, which has 318 turns in 11 miles, is an ok road. We’ve done it before and if there was a way around it to get to our desired route we would have gladly skipped it. We both prefer the long and windy curves with amazing scenery compared to the tight deadly switchbacks of the Dragon. That being said it is defiantly a must do road for all driving enthusiast.

The Fontana Village is located on HWY 28 so we started the trip with part of the Moonshiner 28. This is a great road and the part we rode to get to the Dragon followed along the river. Crossing over into Tennesse on HWY 129 while on the Dragon we made our way to Tellico Plains to start.

After a quick lunch stop we were ready to take on the Cherohala. 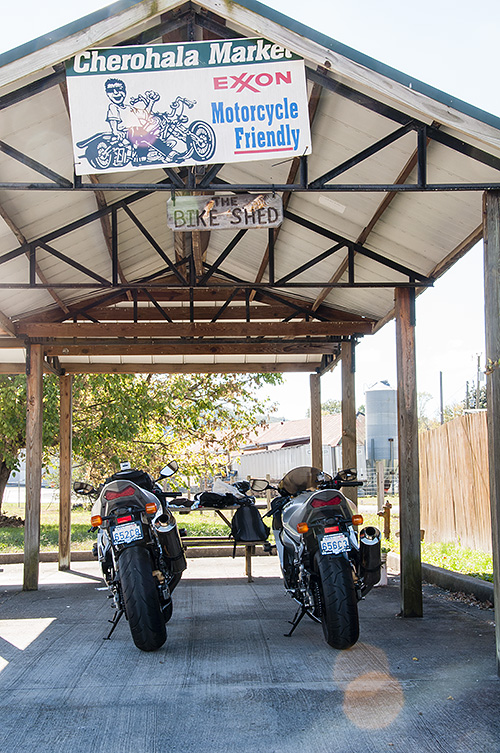 Beginning at Santeelah Gap in North Carolina, the Cherohala Skyway is 40+ miles long and connects Robbinsville, North Carolina with Tellico Plains in Tennesse. The elevation is 2660 feet at the start and quickly winds and twists to the highest elevation of 5390 feet. The road crosses through the Cherokee and Nantahala National Forest.

Our first stop is at Turkey Point lookout at an elevation of 2597 feet. 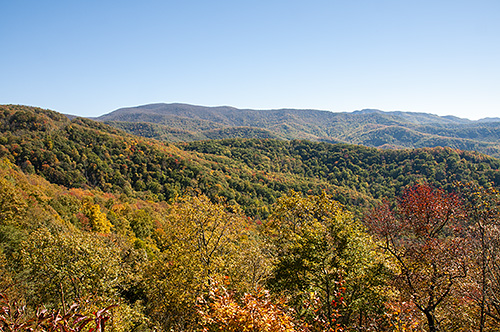 but as we climbed to the top lookout the elevation was 5377 and there were no leaves to be found.

From here we headed back to the village and after riding 120+ miles it was nice to finally stretch out.