“Probably not the toughest event on the planet, but it may be the most fun…”

Originating in Toronto in 2003, the Scion CityChase is an urban adventure event where teams or singles compete to obtain “ChasePoints” over a given period of time. You are given a Clue Sheet and have to solve the clues to find out where you need to go to obtain these Chase Points.

The only way to get around the city was either by foot or public transit and a TTC day pass came with our registration fee.

Once you’ve found the correct location you must complete a challenge which is designed to test your limits and push your comfort zones, with a variety of physical, mental, adventurous and humorous challenges. Think of it as a ‘Mini Amazing Race’

Judy and I chose to do the Chase Classic which had us complete 10 challenges scattered in unknown locations throughout the city of Toronto within a 6 hour time limit.

This year marked the 10th anniversary of the CityChase and the event was hosted at Roundhouse Park and featured the Steam Whistle beer garden. 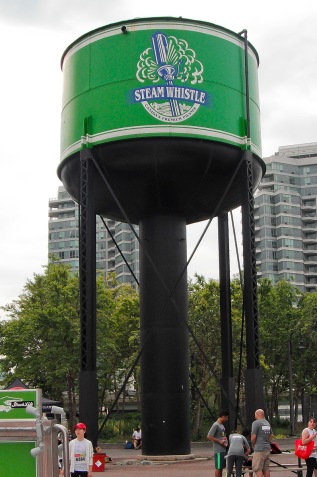 As people were arriving there were a few booths to check out from the sponsors and we had a chance to leave our mark on a Scion.

At 9:15 Goodlife Fitness got everybody moving with a warm-up. 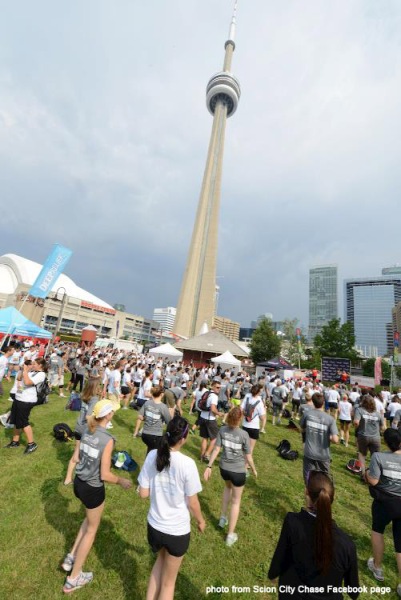 Then there was a half hour official welcome which we feel was about 15 min too long, as were were anxious to get started.

At 10:00 they announced that we could pick up our clue sheet at Gate 2 of the Roger’s Centre and the race was on!!

1200 participants made a mad dash up the stairs of the Rogers Centre to locate the volunteers that were handing out the clue sheets.

We picked up the Official Clue Sheet and started answering as many clues as we could then made our way to our first challenge.

We decided to head East and work our way back. We hopped on the subway and bumped into some other racers who had the same idea. We exchanged some answers and got off at the Danforth just in time for the first down pour of the day. We weren’t complaining about the rain as it kept us cool as we made a run to the first challenge.

Challenge #1 – Approach Shot – Basically this was frisbee golf. We had to take turns throwing a frisbee through Monarch Park and hit marked trees in as few throws as possible.

Challenge #2 – Puzzle Slide – Judy had to slide down a soapy ‘Wet Banana’ type slide and collect matching puzzle pieces along the way and then I had to put the puzzle together.

Challenge #3 – Buzz – At Top Cuts on The Danforth there was a lady who had a ‘Cootie Catcher’ and we had to pick out words to reveal our challenge. I had to shed a tear. It was difficult for the lady to tell from the water already pouring off my face from the sweat and rain but she said she saw one.

For those of you like me who don’t know what a ‘Cootie Catcher’ is, this is what it looks like. 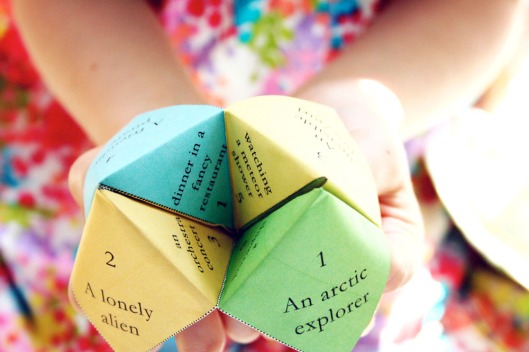 Challenge #4 – Qwerty – To obtain this ChasePoint we were given a Blackberry Q10, and had to complete 4 out of 6 challenges in 20 minutes. We had to use the Blackberry 10 to take either a photo or a video of what we did and show them when we returned. I took a plunge in a cold fountain on the Danforth, we found a very kind women to sing a song with us for 15 seconds, I did 10 push ups in front of ‘Poppas Grill’, and Judy posed like a Greek Goddess in front of ‘Dolce’.

Challenge #5 – Crawly – Judy rolled a dice to see what species she’d have to hold for 30 seconds. Luckily she rolled the Lizard because the Tarantula terrified her. Then I had to answer a trivia question correctly or eat a live cricket. At this point we were running behind so I just ate the cricket.

Yes the cricket is in there and yes I bit it!!!

Challenge #6 – VBBM – We were given two Blackberry Z10’s and had to look at a sheet of paper with different pictures and questions on them. Then I had to go out on the street and find one of the pictures and return with the correct answer. Judy was suppose to video BBM with me while I was doing this but they had connection problems so she got to take a break. 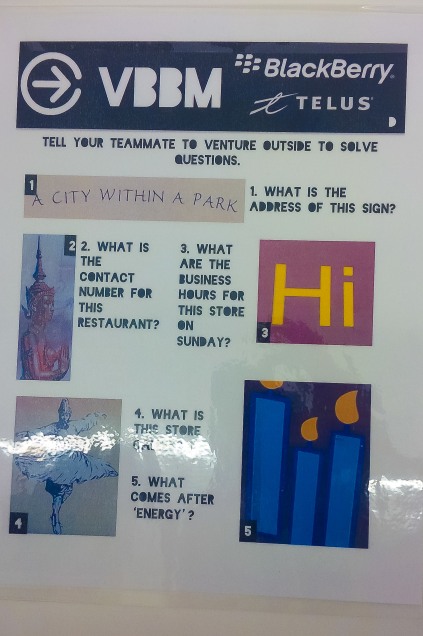 Challenge #7 – Higher Learning – Here we were suppose to climb over a school bus with a rope ladder but because of the rain they had to close it down. Instead we had to answer a few trivia question to obtain our ChasePoint.

Challenge #8 – Cut Me Some Slack – In Trinity Bellwoods Park there were two tie down straps tied between two trees and we both had to walk from one end to the other and if you fell off you had to wait in line and start again. We kicked butt at this one and knocked it off quickly without falling.

Challenge #9 – GOOOAAAALL – This one  was my favourite. I had to drive a Scion and push a giant soccer ball into a net. Judy was only allowed to touch it three times to make sure it stayed in line with the car.

Challenge #10 – Bucket List – We got into a canoe and paddled around a area that had animal pictures posted on the walls. Then we had to go to a desk and put the pictures in the correct order. We were allowed to write them down to remember so this was a quick one for us as I paddled and Judy wrote them down.

From there it was mad dash to the finish line back at Roundhouse Park. We knew we were cutting it close for time to be there in under the maximum 6 hour time limit. Our official recorded time was 5:52:04. 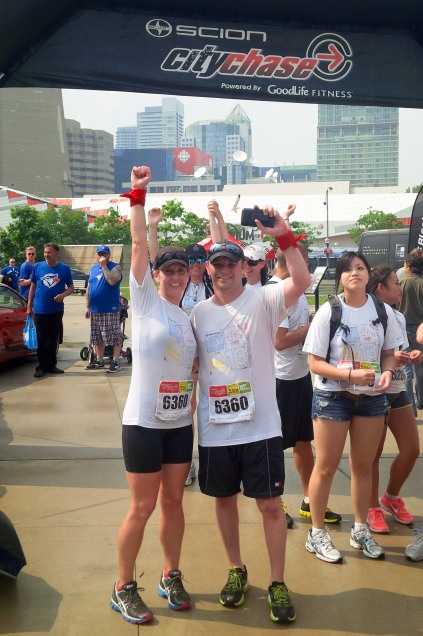 After the Chase was over we sat in the SteamWhistle beer garden for a break and enjoyed our complimentary, well deserved beer. 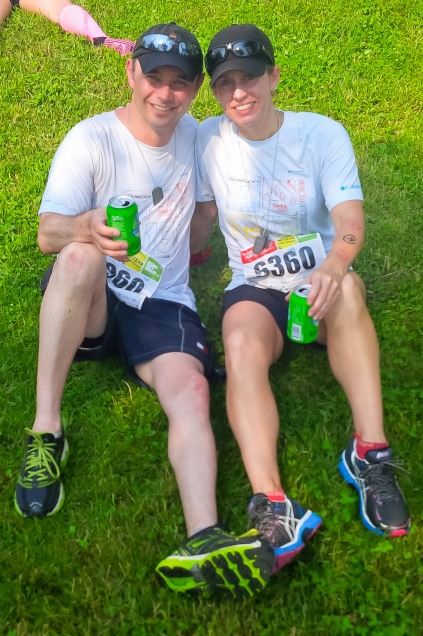 We absolutely had a blast doing the Scion CityChase and can’t wait for next year. Toronto has a second CityChase on August 10th but we’ll be camping, but we have been talking about maybe doing the Ottawa CityChase at the end of July!!

Our only goal for our first CityChase was to complete the mandatory 10 challenges in under the maximum 6 hours time limit and we did!!

We made a few mistakes along the way that cost us some time and brought our running total to 18 km. We’ve definitely already learned from those mistakes and are ready to beat our time for our next CityChase!!